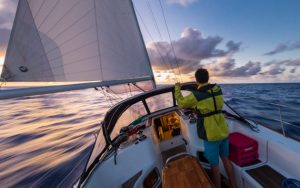 I wouldn’t say that driving a car is like sailing a vessel, but the principle is about the same. You get in your car, you turn it on, press the gas, and then start steering the wheel. Simple as that, you just press a few buttons and then you star going. Most people go through a whole process of starting their cars and going on, sailing is quite similar, it’s a process.

The difference between the two though is that you don’t need to know what kind of engine is in your car for you to drive it. In sailing you’re gonna need to know what is propelling your vessel forward and how it’s doing what it’s doing. Which is why you’re here. You want to know what and how to sail a ship. So, for your convenience, here is a conveniently compiled analyze of the basics of sailing.

Figure out the important parts of your vessel

Now, going along with our earlier comparison between a car, let’s say hypothetically, that you’ve never been in a car. You’ve maybe seen people use cars, talk about them, maybe even brag about them, but you yourself have never been in one, let alone ever touched one.

So, you get in a car for the first time, you’re in the driver’s seat ready to head out, but unfortunately for you, you have no idea what the weird looking round thing is, what the buttons do, or why there are so many darn mirrors inside it. I’m sorry to say, but it’s pretty obvious that you’re not going to be driving anywhere, seeing as you have no idea what you’re looking at.

Again, it’s a perfect comparison between sailing and driving. Like this hypothetical, if you get onto a ship, and you’re looking at all the contraptions and buttons and wheels, and you need to set sail, it just won’t happen. You don’t what the giant weird flags are, you don’t know what any of the ropes do, and you have no idea why there are so many darn life preservers on board. See what I mean?

If you don’t know how your equipment and machine works, then you’re not gonna be able to use it. So, were gonna give you a quick little run down on some of the more important parts of a basic sailboat, it should in essence work for every other type of sailing ship, just bigger or smaller.

First up is your fuel, what makes your ship go forward. For this I think we’ll be sticking to the car comparison, it’s just too good to give up.

In a car, you need to put gas in the tank to make it go forward right? You just go to a gas station fill it up and off you go. When you’re sailing though, you don’t have that luxury, you are kinda at the mercy of mother nature.

The fuel that a sailboat uses is wind, the sails (the big white blanket looking things that are above you), catch the wind that is flying by, and it pushes you forward. It’s efficient, nature friendly, and something that humans have been doing since the dawn of creation, so not bad at all. Gas though is obviously easier.

The tricky part to this though is a simple question. How do the sails catch the wind and how do we lucky sailors use it to push us forward? I mean we don’t really have a tank to collect it in now do we.

Catching the wind is the simpler answer to those two questions. You just turn the sail in the direction from which the wind is coming from. Now, how the wind is propelling you lucky sailors forward so fast is a lengthier explanation.

You can kind of think of it as a sandwich. Your ship, the sailboat in this example, is in between two forces of nature. The wind and the ocean both combine their awesome power to make your ship go. See, the wind as I already touched on, is caught in your sails, pushing you forward, the ocean and the water though under you isn’t pushing you forward. It’s instead the perfect surface for you to fly across on.

See, its kind of like when a car hydroplanes, you’re going really fast in the rain and the water gets in between your tire and the street, making you lose traction, therefore making you spin out, or going forward very quickly, albeit in very unexpected ways.

Your ship floats on the water and gets raised up and pushed forward by the wind, like a paper airplane, wind under the wings makes it float, and the force that you threw it with (the wind being your hand in this example) makes it go forward. All very simple indeed when you have it put into perspective.

A little tid bit of a conundrum that you may be asking about this though is how the sailboat is going forward and not all over the place like a car hydroplaning. Well, the answer is very simple, humans are smarter than wind.

Kidding, but no, seriously, we humans are smarter than mother nature. See, under your sailboat, and most other ships, there is a little doohickey under it called a center board, or a keel. You don’t really need to know much about it, but you can think of it as training wheels on a bike that has no handlebars. All you can do is pedal, and the training wheels make sure you stay upright and going forward.

The last little tid bit about how a sailboat moves without gas is the question of how it keeps from falling over, which is commonly called capsizing. Very simply, humans are much smarter than mother nature, so funny I had to say it twice. Anyway, the answer to that question is weight. The wight in the keel of the ship, the thing that’s on the bottom of it, is a little bit super heavy, and it makes sure that the boat doesn’t fall over. Were gonna go into how to use a ship safely in just a few moments, but a little sneak peak, that weighted keel can end up making the boat capsize if you make too much unequal weight, more on it later.

Following the wind and the point of sail

Now, I explained a basic concept of the science and mechanics of how a ship moves in a literal sense. Now were going to explain how to actually do it, and it’s really not as hard as you would imagine it to be.

Basically, it all functions around the wind, which is pretty obvious. You angle your sail in a direction according to where the wind is blowing, and there are different names for different directions that you are pointing said sail in relation to the wind, which are called the point of sail.

First point of sail is the most basic one. When you are sailing in the direction of the wind, fighting against it, and your sails are trimmed in all the way (trimming refers to the tension in your line when it pulls on the sail, so in this case, it’s being trimmed all the way, the tension of the line is at its maximum and its sails are completely reeled in), it’s called closed haul, or sometimes referred to as a beating.

Next up is when you need to sail away from the wind, you’re going of course, and the wind is hitting your boat from the side. The sails need to be released in a specific order, basically releasing it slowly as your turning the boat. It’s called a close reach, then you move onto a beam reach, and end with a broad reach as you ease the sails out.

Lastly, is the one that is the most fun, the one where you get to really feel the wind in your hair. We are now sailing directly away from the wind; it is now caught in our sails and it is just fine pushing us along. This is called a run and your sails are eased all the way out.

Finding the direction of the wind

We’re gonna get the most difficult one out of the way first, and it may be the most difficult, but it is the most accurate way of doing it. This method is one that I don’t personally use though because I’m not quite experienced with it yet, but not to worry, it is a very simple concept, and I have seen dozens upon dozens of people do it for me.

When wind blows across the ocean surface, it creates ripples and makes perpendicular little waves in the direction that the wind is going. It’s basically trying to see which way the wind will blow using the waters reaction to it. You can especially use this method when the waves are bigger, as there more affected by the wind than smaller currents and waves. If you can’t figure it out with this method, there really is not shame, I can’t do it, hundreds of thousands of others can do it either. So, we rookie sailors can simply stick to other, simpler methods of wind orientation and navigation.

Flags, you’ve gotta love them, there simple, there easy, and there so efficient. It’s really simple, just put one, maybe two or three more on top of the ship and just watch direction they fly in. You can use smoak to find the wind as well, and if you’re really desperate you can cheat off other sail boats and see what they’re doing in relation to the wind.

There are also a lot littler ways you can figure out the way to find the direction of the wind. All of which are just as amazing as the other methods, but we all have a particular favorite in the sailing world, so be sure to find yours.

The conclusion to basics of sailing

So, that was our basic run down of sailing and how to use it effectively. We talked about all the important parts that your gonna need to know if you want to get the basics of sailing or if you’re in some kind of emergency and you need to know how to.

Something important to know is that we wanted to talk about the ropes and knots that are included with your sailboats and other sailing vessels, but we really just couldn’t fit it into this particle break down. Were sure that you can figure it out though, hopefully.

Also, make sure you women keep your accessory handbags at home.  My wife had to learn the hard way when her’s fell overboard – lost to the sea forever.

Thank you for taking some time out of your day to find out the basics of sailing a vessel. Hopefully you found something helpful out of this analyze and come again real soon to find out any more information on sailing.